John Tiedjen and Crystal Strauss tied the knot following his release from prison after he served 32 years for the murder of Brian McGary, Crystal’s half-brother

A woman has married a man who was convicted of killing her teen brother after she fell in love writing letters to him in prison.

Forgiving Crystal Strauss got hitched to John Tiedjen, 57, earlier this month as he awaits re-trial.

He was freed on bond after serving over 30 years for murdering Brian McGary back in April 1989.

Tiedjen admitted killing Brian, who was shot dead when he was just 18, but says he acted in self-defence and denies murder.

Crystal, from Cleveland, Ohio, started writing to Tiedjen in an attempt to get closure.

They quickly fell for each other and says she sees no problem with marrying the man who served three decades inside for taking her half-brother’s life.

She told News 5: “I love him, obviously. If I didn’t love him, I would not be sitting here with him.

“We’ll get through this. It’s going to be a challenge, there’s no doubt about it.”

Tiedjen, who is awaiting his re-trail late this summer, said that they are meant to be together.

“With all my heart I love her,” he explained to the network.

“There is nobody else I think about, and I want to be with her my whole life. I wrote her a letter back and I said, ‘I didn’t do it’.”

The groom was 25 years old when McGary was found dead in the apartment the two men shared.

He served 32 years for the murder but has always maintained his innocence.

At first, the man said his pal committed suicide.

But he later confessed to killing McGary in self-defence – but said he can’t remember anything that happened on the night he died.

The victim was found dead in their apartment with a stab wound and a fatal gunshot wound to the head, according to police reports.

Strauss is now understood to believe he was wrongly convinced of his murder – and will stand by him in court.

Tiedjen told News 5 after the wedding that there was no physical evidence tying him to the shooting.

“I had no powder burns, no gunshot residue, no blood, no cuts, no scrapes, nothing on my person or me or my clothing,” he told them.

According to reports, McGary’s blood was found on the barrel of the rifle, suggesting he’d been shot at close range.

However, the Cuyahoga County Prosecutor’s Office fully believe it still has a solid case.

He is due in court for a pre-trial hearing August 31. 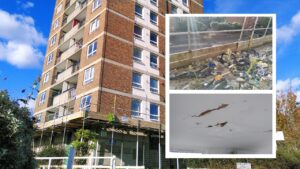 Q&A: Will the looming energy crisis give us a black Christmas?
5 mins ago

Family of boy, 12, killed in indoor ski smash say he ‘didn’t die on his terms’
6 mins ago