After the 1929 financial crisis laid bare the secrets companies kept from their investors about financial health, the US Congress adopted corporate accounting disclosure rules and required companies to get their books audited. While these rules were being drafted, critics howled that Congress’s new requirements would spell the end of American capitalism. Instead, decades of prosperity ensued as confidence grew in the veracity of corporate accounts.

The power of accounting rules must now be applied to ESG and impact investing, according to Sir Ronald Cohen, who, after a successful career in venture capital, has become a force for sustainability.

Investors lack transparency on the impact companies make through their products, employment and operations, Cohen wrote in the Financial Times last year. If governments force companies to publish impact-weighted accounts, “[companies] will immediately start to focus on improving their impact and finding solutions to social and environmental problems”.

An Egyptian-born entrepreneur, Cohen set up private equity group Apax Partners in 1971 — when he was just 26. Now, he is involved with Harvard University’s “impact-weighted accounts project”, which aims to create corporate accounting statements for environmental and social performance — as well as financial.

And he published a book last year called Impact, which highlights companies that are making authoritative progress on environmental and social changes. (See the FT’s review here).

He talked recently with Moral Money’s Andrew Edgecliffe-Johnson about his goal of an impact accounting revolution. What follows has been edited for length and clarity.

Moral Money: You write about an “impact revolution” reshaping capitalism. How far do you think it has gone?

Ronald Cohen: The people who haven’t shifted are businesses. But the impact revolution broke out in the open at shareholder meetings this year: there were 200 resolutions on climate proposed at different companies’ shareholder meetings, from ExxonMobil to Procter & Gamble. I think that’s indicative of what is going to happen as there are a couple of hundred resolutions already in the pipeline for next year. We’re seeing the activist investors lead and the BlackRocks and Vanguards falling in with them in influencing business.

MM: How profound a shift in capitalism does this herald?

RC: It can be very profound if we have transparency and integrity. If we continue with a system of just reporting [impact] in general terms selectively, investors won’t have the means of assuring that they optimise return and impact. That’s why I have been pushing very hard for impact accounting to become mandatory.

MM: And what does impact accounting show?

RC: We’ve published [assessments of] nearly 3,000 companies’ environmental impacts from their operations. People can argue about [the appropriate carbon price] but at $300 a tonne, 450 of the 3,000 companies create more environmental damage in a single year than they create profit. A thousand create damage equivalent to 25 per cent of their profit a year. Together they create $4tn or more of environmental damage. You can already see a correlation in the data between greater pollution and lower stock market valuations, as ESG money has shifted the scale in favour of companies that pollute less.

MM: Are companies and investors filling a vacuum left by government here?

RC: In 1929 we had a parallel situation with financial accounting. Companies could each pick their own accounting principles. They could put away in hidden reserves a share of their profits without telling shareholders. In 1933, four years after the crash, the [Franklin] Roosevelt administration introduced [Generally Accepted Accounting Principles] and auditors — and then the world followed suit. I think we’re at a similar crossroads. Today, $40tn-$70tn of ESG investment is seeking to achieve impact as well as profit but investors don’t have all the information they need to make decisions. If greenwashing has become rife, what is the role of regulators? To make sure companies do not mislead investors.

MM: What will it take to establish impact accounting as the norm?

RC: I think it will be imposed quite soon . . . My feeling is that, just as in the 1930s, when people screamed in Congress that GAAP accounting could be the end of American capitalism, we will have screaming. [But] once again there’s no way that you can do this on a voluntary basis. The new G7 impact task force will bring together a powerful group from the investment, corporate and regulatory worlds to look at this issue of impact transparency. I think we will see pressure for impact transparency and integrity come from all different directions.

MM: What do you consider to have been the biggest turning points in the impact revolution?

RC: I think the past seven years have seen a shift from awareness to understanding and action. When we wrote the G8 task force report there were $40tn of assets signed up to the UN Principles for Responsible Investment — today it’s over $100tn. Impact investment was virtually non-existent; today, it’s at $1tn. When you look at these trends reinforced by Black Lives Matter, the gilets jaunes and other social upheavals and you look at the global focus on climate, all these things have come together. After the Business Roundtable statement in 2019 and Larry Fink’s letter in 2018, there’s a feeling now of an unstoppable train.

MM: What happens next?

RC: The [establishment of a Sustainability Standards Board] is very important because it brings regulators together to protect the needs of the investors that are pushing the impact revolution forward. The Business Roundtable talked the talk but didn’t walk it. Companies are being held to account [to some extent] but they are pushing back because if there was total transparency they’d really be held to account. You can see from the Harvard data that Exxon creates environmental damage of $35bn a year, Shell creates $23bn and BP $14bn a year. You can see how providing this transparency begins to create a race to the top: as an investor you want to support the companies engaging in a transition. The first 1,800 companies we analysed had made public 80 per cent or more of the information we needed [and] we imputed the rest. Companies are going to find themselves in a situation where data about them is estimated, and if it isn’t accurate they’re going to be screaming. We need to have a single comparable verified [data] set; we just have to make sure the voice of investors is loud enough about greenwashing that regulators and political leaders hear it.

MM: How important is transparency about impact to building trust in business?

RC: Companies are going to be very careful about visibly opposing the publication of data, even though we’ve seen some saying ‘the measures are not accurate enough and we don’t want them to be mandatory’. They are very worried about being targeted for engaging in greenwashing, [and] impact accounting . . . will serve companies by reducing the multiple demands for data they face. Most companies will not be embarrassed by impact disclosure. I think as long as companies engage in transitioning to better impact outcomes they won’t be punished by investors, talent and consumers.

MM: Public markets capture a smaller portion of the economy than they used to. How does impact measurement work for private companies?

RC: Impact measurement has come to private equity too because investors are pushing private equity firms to align impact with their activities. You have specialist impact funds measuring impact at TPG, Bain, KKR, Partners Group and Apax — other firms won’t be immune. The fact they buy fossil fuel companies is not going to protect these companies from impact transparency: they’re going to have to wake up to lower exit valuations for companies that do harm and pressure from investors not to invest in them. Smaller businesses will need a simplified way of measuring their impact but many are already attuned to the issue.

MM: Should we trust capitalists to set the rules of impact capitalism?

RC: I’d say you have to decide whether you want to give up the use of free markets and capital and the entrepreneurialism they bring, which even China has adopted. Whether you want to use capital and guide it in a different direction or want to destroy it. If you decide no other system has been more effective at raising people out of poverty, then it is a way of bringing the invisible heart of markets to guide their invisible hand.

MM: Can capitalism reform itself?

RC: The answer is that, after 250 years, it has to do so, because the negative consequences of the search for profit alone are so big, climatically and socially, that even governments can’t cope with them. If you bring impact into investment decision-making and success for businesses is redefined as maximum profit with maximum impact . . . then you can see how business and investors can bring solutions to our problems instead of aggravating them. That is where the world is heading — to guide investment to more purposeful social and environmental ends.

Do brands that invest in purpose-driven ways deliver higher margins and greater shareholder returns? A study of “high and low purpose” companies released this week suggested that they do. Even as Covid-19 hit most companies’ revenues, high-purpose companies were less severely affected, according to the Journal of Applied Corporate Finance. 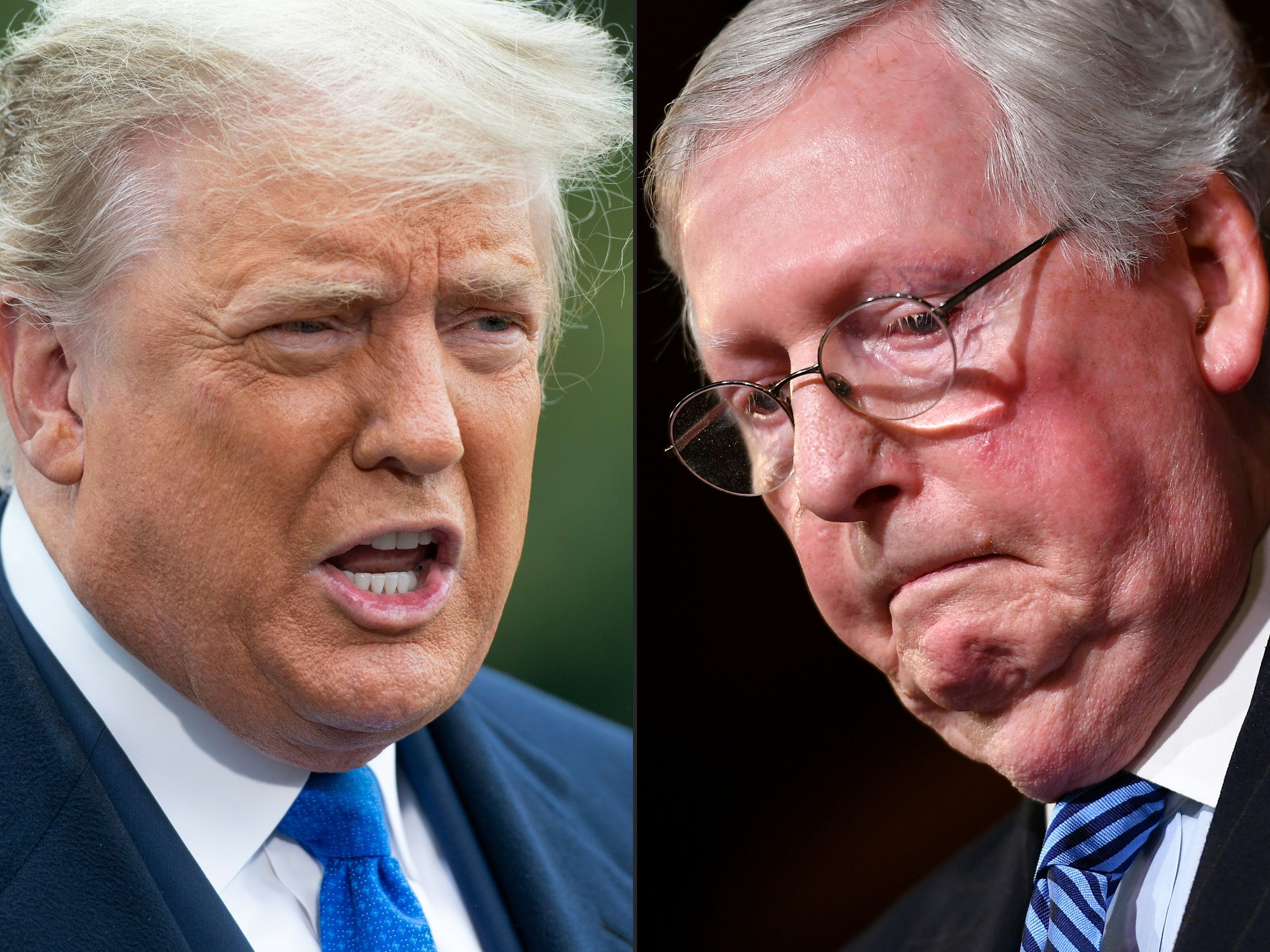 “Doesn’t have a clue”: Trump calls on Mitch McConnell to resign as Senate minority leader
1 min ago