The premiere of …cake by award winning playwright babirye bukilwa has opened at the Theatre Peckham.

Written by the Women’s Prize for Playwriting 2020 finalist, …cake forms part of a trilogy of plays and is a prequel to the critically acclaimed …blackbird hour.

It takes place in a single evening, in a dingy flat where the flowers are dying, the washing up is piled high but music fills the air.

There are just two characters, Sissy, who lives in the flat and her sixteen-year-old daughter Eshe who has come to see her.

The dialogue is stilted at first, and there is more left unsaid than said, but the story gradually unfolds.

We learn that Eshe has moved out months ago, her mother is deeply hurt, and Sissy is going to “meetings” but is still drinking and smoking.

The dynamics of their relationship are also slowly unveiled.

We see their chemistry as they sing together and a deep shared feeling that it is them against the world, which has been stretched to breaking point.

More present is the more toxic side to the relationship – Sissy’s erratic and spiteful behaviour, the betrayal she feels about Eshe leaving and the punishment she inflicts on her through ever-changing goalposts.

We see how Eshe is both pulled towards and pushed away from her mother and the paralysis she feels in not being able to stop loving someone who hurts her over and over again.

The pressure is never eased as the play reaches its heartbreaking climax.

Both performances are incredible.

Donna Banya who plays Eshe, is equally mesmerising, fully inhabiting the body of a confused 16-year-old in every movement.

The play uses some surreal effects, such as water pouring onto the stage to show Eshe’s inner turmoil – but they are perhaps superfluous since her mental state is shown so well through the performance, and a little distracting.

The play draws you in from the beginning, pulls you from moment to moment and doesn’t let you take a breath.

…cake is on at Theatre Peckham until August 7. Tickets can be purchased here: https://www.theatrepeckham.co.uk 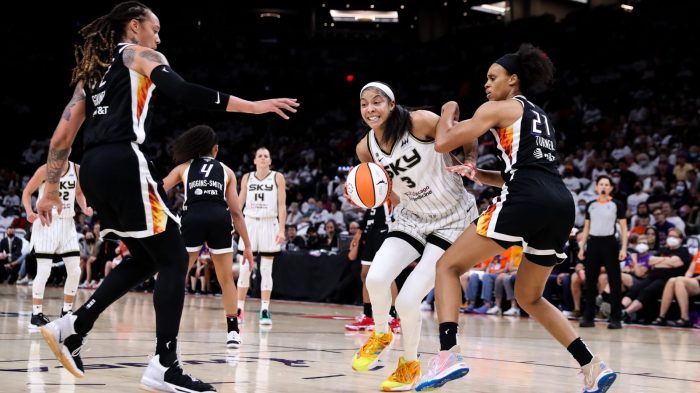 Is There Anything Candace Parker Can’t Do?
7 seconds ago

Is There Anything Candace Parker Can’t Do?