For 70 minutes at The Valley on Saturday afternoon, Charlton outplayed a side who will (almost certainly) be competing in the Championship next season. Granted, they couldn’t score. But for much of the occasion, it was Charlton who controlled the ball and dominated the territory.

Unfortunately for Nigel Adkins’ side, the damage was already done. Jonson Clarke-Harris fired into the bottom corner from outside the box in the ninth minute to give Peterborough the lead – a lead that would prove enough to win the game.

Peterborough are a very good team – they’re heading up for a reason. Adkins can take confidence from the fact his team reduced the visitors to defending their box for much of the second half while Jayden Stockley’s 32nd-minute penalty could completely have changed things. But the slow start in which Peterborough overran Charlton is cause for concern – particularly considering the growing trend it is a part of.

Adkins’ reign officially began with the 2-2 draw at Wimbledon, but in reality, it was more Johnnie Jackson’s team chosen that day. Since returning from the international break, Charlton have amassed 10 points in five games – a total that has put them firmly in the reckoning for a play-off spot. The run includes huge wins away at Doncaster and Sunderland as well as the 6-0 demolition of Plymouth. But even their successes have had to be earned after clawing their way back from trembling starts. Their previous opponents failed to punish them, but Peterborough, with an attack that boasts the league’s top scorer (Clarke-Harris), as well as Sammie Szmodics and Sriki Dembele, were never likely to be as forgiving.

In truth, the visitors could, and probably should, have been well out of sight inside the opening 20 minutes. Szmodics saw a great chance blocked by Pearce and Dembele had an effort saved before Clarke-Harris’ goal. Peterborough appeared much quicker, constantly finding gaps with their movement and pressure. Just a few minutes after the goal, Szmodics was foiled by Amos when clean through.

Charlton couldn’t get going as Peterborough swarmed all over them, managing five shots to the hosts’ zero, and four touches in Charlton’s box compared to just two the other way.

Seeing his team cut apart repeatedly by the venomous Peterborough attack, Adkins reacted by moving Jake Forster-Caskey deeper alongside Ben Watson. Whether it was due to the alteration or the visitors adopting a continuously more counter-attacking approach, the game quickly shifted and Charlton began to command proceedings.

While Forster-Caskey roamed all over the pitch in typical fashion, his heat-map below shows how frequently he took up a position deep inside his own half. As is clear from Watson’s heat map, the former Nottingham Forest midfielder played on the left side in front of Charlton’s defence, whereas Forster-Caskey took up a similar position on the right.

Following the tactical switch, Charlton’s passing accuracy rose from 77 per cent to 81 per cent and while they held 55 per cent of the ball in the first 20 minutes, their possession grew substantially to 65 per cent in the 70 minutes afterwards. Meanwhile, they outshot Peterborough 11 to four following the opening salvo that had seen the visitors blast their way in front. Charlton pushed forward, totalling 16 touches in Peterborough’s box while Darren Ferguson’s side had just nine in Amos’ box.

Charlton deserve credit for turning the tide of a very difficult game, but they didn’t quite have enough to make it count. Peterborough’s quick start proved decisive as Charlton struggled to really test Josef Bursik with their flurry of shots.

Four days earlier at Plymouth, Charlton had no such issues, recovering from an inauspicious opening period to plunder six past their beleaguered opponents.

While Charlton managed to avoid the barrage of shots they faced against Peterborough, Plymouth still controlled the early stages of the game, holding 68 per cent possession and having five touches in Charlton’s box compared to just one for Adkins’ side in their own attacking box.

Plymouth were limited to one shot as Charlton resolutely defended their goal, but it took time for visitors to find their feet and do their damage at the other end. After the opening quarter of an hour, Charlton’s possession grew from 32 per cent to 46 per cent while they created 13 shots to Plymouth’s 10 in the remaining 75 minutes.

When Ipswich arrived at The Valley fresh off of a scathing defeat at Wimbledon, they came out with the type of reaction their manager Paul Cook was determined to incite. Despite their poor run of form, Ipswich held 80 per cent possession in the first 15 minutes and created two shots to Charlton’s one.

Through the rest of the game, Adkins’ side kept 53 per cent of the ball, had 13 shots to the visitors’ two, and managed 29 touches in Ipswich’s box compared to 14 the other way.

At the Stadium of Light, Charlton claimed potentially their biggest win of the season (so far), ending Sunderland’s 14-game unbeaten run with a deserved 2-1 victory. But yet again, the outcome could have been so different had the hosts done more with their early chances. Aiden O’Brien narrowly volleyed wide from close range before Charlie Wyke stole the ball from Darren Pratley and saw his attempted chip well-saved by Amos with only the keeper to beat.

Charlton improved as the game wore on and were certainly worthy of the victory in the end. But Sunderland will feel there should have been no game to get back into.

Charlton’s first match post-international break trod a different path as Adkins’ side were the ones who struck early, Ian Maatsen scoring in the 12th minute. The goal allowed Charlton to sit back and soak up pressure, doing so rather comfortably en-route to the 1-0 win. But even in Adkins’ inaugural game in charge against Wimbledon, Charlton were fragile early on – despite scoring the first goal this time. Through 15 minutes at Plough Lane, Wimbledon had three shots to Charlton’s one as well as 52 per cent possession. Oh yeah, and Ryan Longman’s equaliser to go with that.

In fairness, while Charlton struggled defensively, their attack began quickly that day, Diallang Jaiyesimi scoring in the 21st minute to regain their lead. But the pattern is becoming clear: Charlton are severely struggling to impose themselves from the off.

The “why” of all this is unclear. Charlton are playing with an energy and enthusiasm that was often lacking prior to Adkins arrival. And with confidence flowing through the team, surely they shouldn’t be starting games so tentatively?

Asked about it after the 1-0 defeat to Peterborough, Adkins said he will reflect on the troubling issue.

“We talk about it,” Adkins said. “We talk about trying to get the ball in the right areas of the pitch. I will reflect on it, maybe we didn’t start that bad? But we’ve conceded in eight minutes, so does that constitute a bad start? Yes, because we’ve gone and conceded. But I’ll reflect on it.

As Adkins points out, Charlton improved once Forster-Caskey dropped deeper to help his team hold the ball instead of just going long to Stockley. While it may not be the full solution, this does seem the right place to begin, with a lack of controlled possession no doubt contributing to Charlton’s flat starts.

Through Adkins’ six games so far, Charlton have averaged just 41 per cent possession in the first 20 minutes and a rather mediocre 67 per cent passing accuracy. Both these numbers have tended to grow substantially as the game continues, their share of the ball rising to 49 per cent and their passing accuracy to 72 per cent. The difference becomes even starker when the outlier of the trip to Doncaster – where Charlton struck first – is removed. In their other five games under the new management, Charlton have begun with 40 per cent of the ball in the opening 20 minutes before seeing that number rise to 51 per cent in the other 70 minutes. Meanwhile, their passing accuracy in the opening periods of those games has been just 67 per cent, rising to 74 per cent after the difficult starts. 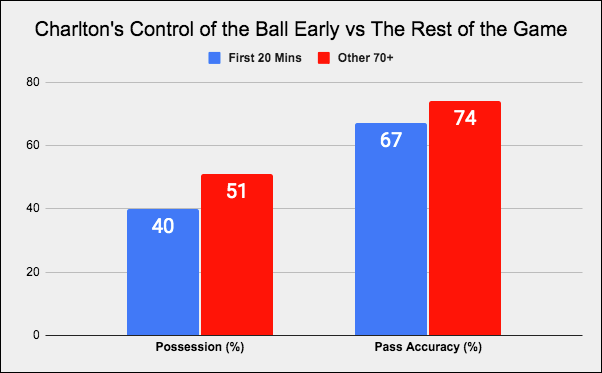 Their shot count in these matches tell the same story. Across their last six games, Charlton have managed just six shots in the opening 20 minutes compared to 13 for their opponents. But following the sluggish starts, they’ve usually been the team in the ascendancy, creating 52 shots to their opponents’ 42.

Adkins’ style of play tends to revolve around dominant possession of the ball and passing through teams, but maybe it takes time for Charlton to get to grips with the speed of each game. Regardless of the reasons, there’s currently a massive discrepancy between Charlton’s performances in the early stages of their games and what they’re coming up with later on. They’ve had to weather storms of pressure in the first few minutes of almost every game so far under Adkins. But thanks to a defence that has conceded one goal or fewer in their last five matches, they’ve mostly been able to escape these slow starts fully intact. The best teams, however, will punish them – as Peterborough did.

Under Lee Bowyer, Charlton had lots of issues but they didn’t struggle heavily with this same problem. Charlton have conceded a total of eight goals so far this season in the opening 15 minutes of their League One matches, 14th-most in the division – slightly better than average.

Adkins knows his players are capable of fighting back after rough periods, but as seen on Saturday, sometimes an early hole is just too difficult to recover from – especially against teams who are comfortable defending.

It’s a sign of a capable group that Charlton have been able to consistently flip the momentum of their games. But they can’t keep starting on the back foot. It cost them dearly on Saturday and with four games to go – and virtually nothing to separate the play-off-chasing teams – it could easily cost them again soon.