Geoff Thomas will never forget the day his world was “stopped in its tracks.” When he retired from professional football in 2002, following a solid career which saw him patrol the middle of the pitch for close to two decades, it was only his knees that signalled to him that maybe that he should call time on the sport he loved.

More than 12 months later, in July 2003, after suffering from vicious night sweats and severe weight loss, which Thomas said he ignored for “quite a few months” before going to his GP, the former Crystal Palace captain was diagnosed with chronic myeloid leukaemia – he was told he had three months to live.

This June, Thomas is set to lead a team of 25 amateur cyclists across the entire 21 stages of the Tour de France, pushing himself physically and mentally as he and Cure Leukaemia look to raise over £1million for the doctors, nurses and clinical trials which saved Thomas’ life.

Speaking to the South London Press, Thomas pauses before he recounts the day which changed his life forever: “It’s a horrendous experience which you would want anyone to go through – but many do. It makes you go into a dark place for a number of days while you scramble around for any positives, and at first, there weren’t any.”

While Thomas struggled to cope and comprehend the devastating news that brought his world to a standstill, he received an overwhelming amount of good luck messages left for him by the Palace faithful on their fan message boards. “It made me so emotional knowing that they were fully behind me,” said Thomas. “The Palace fans were a positive for me in a very dark time.”

Reminiscing with fondness about his time at Selhurst Park – where he captained Palace to an FA Cup final, a third-place finish in the First Division and lifting the Zenith Data Systems Cup – Thomas says: “Ever since I was 18, I always seemed to be handed the armband – maybe it’s because I was the loudest in the dressing room. I was the sort of player who always gave 100 per cent, and I demanded that of my team-mates – I was a conduit between the playing and the coaching staff.

“I loved every single minute leading Palace. We were a very successful team, and it’s just a shame we couldn’t go that little bit further that we needed. It’s easy with hindsight, but maybe with a little bit more investment, we could have been a great team.”

But while Thomas, who amassed over 400 games in his career and nine England caps, is still tremendously proud of what he achieved in football, the satisfaction he gets from his charity work is beyond comparison.

He begins: “It’s two different things. I loved my football career – it was 19 years of just total enjoyment. But after I was diagnosed, it was a different chapter of my life. It isn’t three points if we achieve something, it’s now something that is making a difference in people’s lives, or we’re finding new opportunities to deliver hope to patients.

“It’s my passion and my drive, no matter how difficult it gets, to keep letting people know how important the work is that we are undertaking, making sure that people know that every single penny which is donated is making a difference. We’re funding clinical trials, which wouldn’t happen if the infrastructure that we’re funding wasn’t there.

“My role in all of this is to keep banging that drum and making sure that the great people, the professors, the clinicians and the clinical research nurses, are able to do the work without their hands tied.”

When Thomas was told that he was in remission in February 2005, after a bone marrow transplant from his sister saved his life, he discovered cycling by July of that year. When asked if the sport allowed him to feel himself again after such a traumatic experience, Thomas said: “It definitely did at the start. My first challenge of doing the tour was one of those moments where I could say goodbye to that trauma – being given the all-clear and being physically and mentally right to start again.

“Bringing people together is my job. We have campaigned in Parliament, which is mundane in many ways because you feel as if you’re banging your head against the wall.

“But the enjoyable bit is doing the cyle challenge, not the ride itself – I find that really difficult – but I enjoy bringing people together and watching them grow in big challenges. We have people who haven’t been touched by blood cancer, but just by doing events, you bring them into the family.”

As Thomas trains tirelessly for his final tour, he chuckles when he says: “It definitely gets harder [the more tours you do]. This year I have been putting a bit more effort into preparing for this tour. 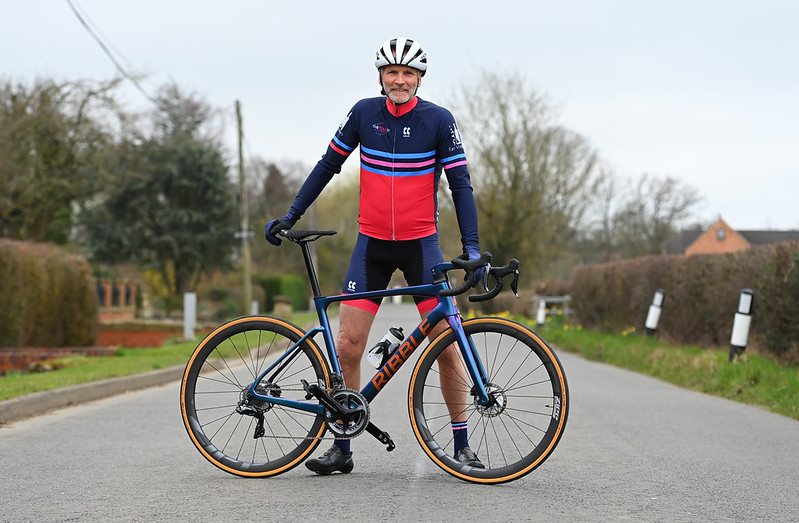 “I have always been told to respect the challenge, right from the beginning when I first got into the cycling world in 2004. It’s a mental and physical battle for 21 days, but when you do finish it, and you do reach the targets which we are trying to reach, it’s an amazing feeling. That’s the experience we’re selling, that feeling of crossing the line in Paris is something you will never forget.”

Asked to explain the feeling of crossing the finish line in Paris, Thomas adds: “During the 21 days, you will have gone through pain, tremendous highs and lows, excruciating ups and downs. I can guarantee you there will be days when it perhaps kicks off a little bit – like a dressing room. However, by the time you reach Paris, you are a team – solid and united together.

“When you do cross that finish line, it’s just a moment full of emotion. I have seen it many times, and I don’t get bored of it. I don’t get tired of it, and crossing that line feels equally special every time.”

Crystal Palace have donated their signed match-worn shirts from the game against Chelsea in April to Geoff Thomas, which will be auctioned off, as the former Eagles’ captain looks to raise £1million for Cure Leukaemia ahead of his last Tour De France.

And the support that Thoams has received from his former club still fills him with immense pride. “Palace have been there from when I first needed them,” said Thomas. “The club continues to support me, donating the signed match-worn shirts, sponsoring the kit for the cyclists and a stage of the tour – it means so much to me.”

“It’s hard for me to ask for any more from the Palace fans – I am so grateful to them. But if every Crystal Palace fan could have a look at what we at Cure Leukaemia are doing, what we are trying to achieve. And if you can spare a little bit of time, or a little bit of money, that would be fantastic. Every penny does make a difference.”

The tour will begin on June 19 and finish when Thomas leads his team over the finish line at the Champs-Élysées on July 11. The auction for the 11 match-worn shirts closes at 9pm on Sunday, May 23 – you can bid here https://www.sliderstock.com/palaceshirts