G20 leaders meet in Rome tomorrow and Sunday — some in person, including EU top officials and US President Joe Biden, others virtually (China’s Xi Jinping and Russia’s Vladimir Putin), just before reconvening for the COP26 climate meeting in Glasgow on Monday. From the EU perspective, it’s a litmus test for its self-declared leadership, as it will prove a tall order convincing other countries to follow suit. We’ll bring you up to speed with the latest and what to expect from the back-to-back high-level meetings.

On the Brexit front, a fresh round of talks is taking place in London today between EU Brexit commissioner Maros Sefcovic and his UK counterpart, Lord David Frost — with the dispute with France over fishing rights likely to sour the mood. But in brighter news, the EU is now recognising UK’s digital pass proving Covid-19 vaccination, meaning that Brits travelling to France (or Belgium) will have no problems getting into restaurants and theatres.

Down south, we look at what the budget fiasco in Portugal means for Prime Minister António Costa and his potential ambitions to scoop up a top EU job.

And in an interview with the FT, Moldova’s PM Natalia Gavrilita points to the fact that the modest aid she’s secured from Brussels is nowhere near the sums her country will need to make it through the winter and not cave in to Gazprom’s demands.

A quick housekeeping note: Europe Express will be off on Monday and Tuesday, but we will be back on Wednesday, November 3.

For the last two years, the EU has styled itself as the world’s leading diplomatic power on climate change. Over the next fortnight, those claims are going to be put to the test, starting with this weekend’s G20 summit in Rome, writes Mehreen Khan in Brussels.

The presidents of the European Commission and European Council will be taking part in negotiations with leaders from the world’s 20 richest countries in a prelude to next week’s marathon COP26 negotiations on climate change.

At the Rome summit, the EU will be centre stage in pushing for maximum contribution from rich country polluters which make up 80 per cent of the world’s greenhouse gas emissions. They include China and India who last night set an ominous tone for talks by submitting national climate plans to the UN that defied pressure for accelerated action.

At the G20, leaders will spend the weekend tussling over the Paris agreement’s promise to limit global warming by 1.5 degrees Celsius — a target they are on course to miss. Beijing, Moscow and Delhi have also resisted signing up to pledges to phase out coal in the summit communiqué. China’s national climate plan stuck to an aim of ramping up domestic coal production until 2025 (coal accounts for nearly two-thirds of Chinese electricity production).

Convincing rival powers such as China and Russia (whose leaders will not be present in person in Rome or Glasgow) will be a major test of the EU’s green clout.

After the Trump administration came to power and took the US out of the Paris accord, the EU manoeuvred itself as a leading force on ambitious emissions reductions by enshrining a net zero climate law and laying out tough plans for the decarbonisation of the European economy over the next decade. By comparison, the new Biden administration, even though it rejoined the Paris accord, is struggling to win domestic political support for its own net zero plan.

Ursula von der Leyen, commission president, has called the G20 a “pacemaker” for COP26’s “moment of truth” in the fight to reduce emissions. “The science says we are not on track,” she told reporters yesterday.

Declaring success at COP26 may end up in celebrating technical achievements, on sticky issues such as carbon trading, rather than grand political gestures on the phasing out of coal or agreeing a plan to reach the 1.5 degree Celsius target which looks set to elude world leaders again.

One area where the Europeans are hoping for headline-making progress is reaching the $100bn target for climate financing for the world’s poorer countries. The totemic figure has been constantly undershot at previous summits, sowing mistrust between richer nations and their poorer counterparts. The EU is the world’s single largest pledger and wants the US to catch up so the goal is met in 2022 and the subsequent two years.

What will be the outcome of COP26? Tell us what you think and click here to take the poll.

UK and European natural gas prices fell yesterday after Russia’s president Vladimir Putin ordered state-run Gazprom to begin filling storage facilities in the continent from next month. UK benchmark prices for both November and December delivery were down almost 10 per cent, while the European benchmark in the Netherlands declined 6 per cent. (More here)

Good news for Britons wanting to visit the EU: All member states will accept the NHS-issued Covid-19 app as proof of vaccination from today, writes Andy Bounds in Brussels.

In many countries, including France, Belgium and the Netherlands, a QR code indicating you have been vaccinated is necessary to get into bars, restaurants and public events.

Following a decision by the European Commission, the system in England, Scotland, Wales and Northern Ireland is now linked to the EU one so the scanners used by staff policing entry will recognise it.

Vaccinated Britons can also freely cross EU borders, not just those with bilateral deals to accept the NHS app.

Equally, the UK will accept EU certificates, though checks there are much lighter.

In addition to the UK app, the EU also decided to recognise Armenia’s QR codes, said justice commissioner Didier Reynders. The EU-issued codes are now accepted in 17 other countries outside the bloc, including Turkey, Panama and Morocco (but not the US).

Today the Commission adopted two new decisions certifying that the #DigitalCOVIDCertificates issued by Armenia 🇦🇲 and the United Kingdom 🇬🇧 are equivalent to the EU DCC.

45 countries in four continents are now connected to the 🇪🇺 system and more will follow in the coming weeks. pic.twitter.com/CiXSU3rMsu

António Costa, Portugal’s centre-left prime minister, was widely expected to step down as leader of the Socialist party before the next general election — scheduled until yesterday for 2023 — and seek a top post in Brussels. One former Portuguese socialist MEP had tipped him as a potential candidate for the presidency of the European Council, writes Peter Wise in Lisbon.

But Costa has been forced to put any such ambitions to the side, at least temporarily.

The anti-capitalist Left Bloc and old-guard Communist party, two small parties that had supported his minority government since 2015, sided with the right-of-centre opposition on Wednesday to vote down his 2022 budget proposals, triggering a political crisis that is almost certain to lead to a snap election.

Costa appeared to have been counting on the €14bn in grants that Portugal will receive from the EU’s €800bn post-pandemic recovery plan to lift his party’s fortunes over the coming years, potentially putting an absolute majority within reach of a potential successor in 2023.

Instead, he has pledged to lead his party into the snap election that President Marcelo Rebelo de Sousa is expected to call for February and seek another four-year term as prime minister. He has vowed to fight the election on a leftwing platform, maintaining all the measures negotiated with the two smaller far-left parties in the budget that they have rejected, a bill described by the Socialists as Portugal’s most expansive budget proposals in recent history.

The risk of the election proving inconclusive is considerable, however.

The Socialist party enjoys a strong lead in opinion polls, with about 38 per cent of the vote. But that would be insufficient to secure an overall majority.

If the far-left continued to deny Costa support, he could find himself at the head of a minority government forced to negotiate parliamentary support bill by bill or to seek an understanding with centre-right opposition. 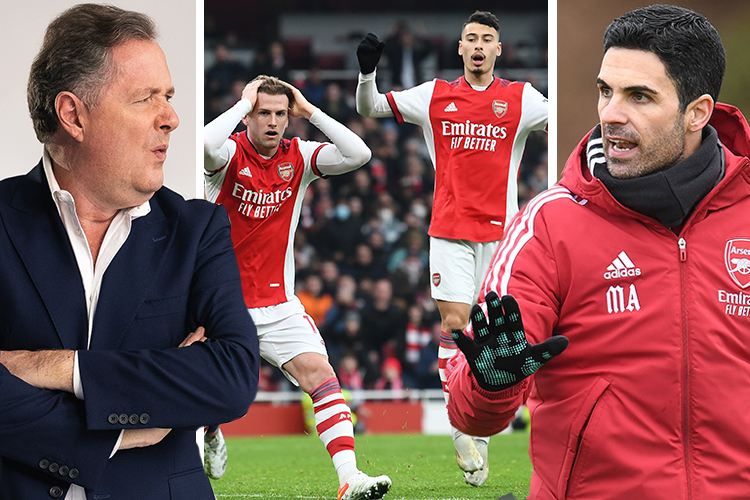 Piers Morgan: Arteta’s ‘trust the process’ has worn off it’s top 4 or the sack
5 mins ago

Piers Morgan: Arteta’s ‘trust the process’ has worn off it’s top 4 or the sack