The number of EU citizens arriving in the UK before the pandemic has been revised significantly upwards by the official statistics body, changing the picture of UK migration for the past decade.

The Office for National Statistics on Friday released a set of studies reflecting changes made to adapt to the challenges of collecting data during lockdown for this key topic for policymaking.

The data showed that during the nine year period ending March 2020, before the first lockdown, EU net migration averaged 216,000 people per year, 76 per cent higher than previous figures.

UK net migration has been negative every month since the first lockdown in March, reflecting the impact of Covid-19 travel restrictions and Brexit, peaking in June when 21,700 more people left the country than arrived.

Jonathan Portes, professor of economics and public policy at King’s College London, said that while the data confirms that there was a substantial net outflow, especially of EU citizens, at the start of the pandemic, “we should not place too much weight on the exact numbers”.

Portes had estimated that up to 1.3m people born abroad left the UK between the third quarter of 2019 and the same period in 2020 in a blog published earlier this year by the government-funded Economic Statistics Centre of Excellence.

He said on Friday that disruption of the standard surveys from which migration statistics were calculated meant the ONS findings come from a complex modelling exercise that incorporated “some genuinely heroic assumptions about how people behaved as the pandemic took hold in the early months of last year”.

Madeleine Sumption, director of the Migration Observatory at the University of Oxford, said that the ONS data provided “a fair amount of evidence to suggest that emigration was lower than early data suggested”. 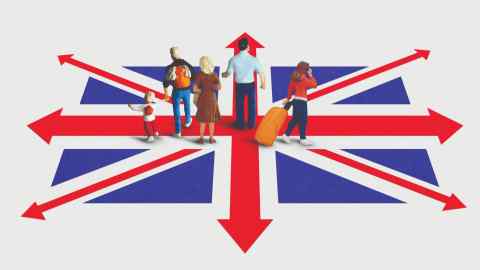 Although the ONS did not provide estimates for the whole of 2020, Sumption said it had shown that “after years of substantial net migration from EU countries to the UK, the trend appears to have gone into reverse”.

Migration figures have been subject to high uncertainty following the suspension in March of the International Passenger Survey on which they were based.

In the nine years to March 2020, EU arrivals averaged 407,000 per year according to new estimates, 81 per cent higher than previous estimates.

In contrast, non-EU net migration during the same period was 54,000 or 31 per cent lower in the new figures compared with the old, survey-based estimates.

“This report should really boost our confidence that UK migration statistics are getting more accurate and more useful for informing the public debate,” Sumption said. “Data like these can have a real impact on how people think about policy.”